Club Member
If you go the money Odyssey, but they are hella expensive.
I have had luck with Northstar or the Motomaster Eliminator Ultra one (especially when they are on sale). Do not buy Optima, mine lasted like 8 years but I got it just before they moved to Mexico. Since then their quality has been hit and miss
J

You know, I’ve heard lotsa griping about Optimas, yet I’ve had nothing but good luck with Optima. Still not cheap though.
Worth it weight in gold is one of Canadian Tire’s smart chargers, cost ya about $100 but surprising what they’ll bring back from the dead. 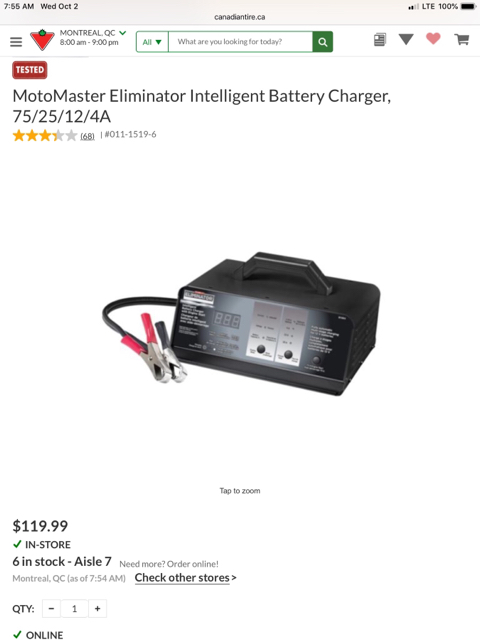 Club Member
Thanks guys, kirkland conventional. I have a motomaster 10A/2A and tried to quick charge and trickle charge. Couldn't get it past 11.8 or so. I may try it on the trickle charger a bit longer.

I'll have a look at an oddessy - thanks guys. I have heard the same about the Optima widely from car racers and off roaders. I think I will stay away from them since the production moved.

Club Member
Last spring I really killed my Odyssey, it was low enough my smart charger refused to do anything. I had to use a dumb charger to bring it up enough for my smart charger to take over and after a long time it recovered. I used it all summer including some winching and haven't had a problem. It may not be 100% but it's good enough I don't need to go spend another $300+ yet.
J

Yeah cool eh! Those smart chargers work wonders, real game changer. I’ve had luck piggy backing a know good battery to a dead one just to get it started. The smart charger needs to see a minimum voltage before it’ll agree to play. That old school 10a/2a charger wont yield the same effect.

Club Member
Ya it says 'Automatic Charger' on the front which I assume is different and it is indeed a dumb charger. I will still try to trickle charge it to see if it revives.
F

Club Member
Haven't picked up a new charger yet. But, in order to move her into the garage for the winter, I boosted it with the JGC, and it had enough juice to spin the starter... -ish. The damn solenoid is out! One more for the list...

I ended up pushing it in with the JGC with a tire in between - I'll pull the starter another day once I have finished reworking the garage set up.
F

Club Member
Been a while, how are folks...feeling cooped up? I feel

but still have a job so that's good.

Replaced the starter ^ a while back, which was interesting...sure isn't a lot of room to work in between everything. I haven't worked on the dang thing in a while, been focused on house renos. The libby needs a new rad as she developed a crack in the top outlet. Driveable for a little bit, but she gives a nice steam show after about 10 minutes ha...she's off the road for a bit til I find the time to fix her up. I sure miss off roading the thing.

Decided against towing with the JGC, as it isn't the right model, bummer. With the 4.7 it is only rated to ~6200. I was looking for a hemi but used prices are bananas these days.

Liberty will probably just end up being a cottage truck sooner than later anyhow. How hard is it to green plate it and run it down the shoulders to crown land...the land we have is only 1-2 kms from a whole ton of it (near Griffith).

Club Member
@Logan and others have gone the green plate route, sounded straightforward for them, not sure if you have enough "non-street-legal" mods to pull it off?
F

Club Member
Thanks @Kunker looking at the regs, it isn't clear on what you mentioned about mods, interested to hear from others on this.

Function > Form said:
Thanks @Kunker looking at the regs, it isn't clear on what you mentioned about mods, interested to hear from others on this.
Click to expand...

The jist was that you go in and write down the list of modifications that make the vehicle no longer street legal, and they give you a green plate with the caveat that the VIN can never again be re-registered for the road. I haven't done this myself, though, so this is just what I've read here.
F

Club Member
Replaced the rad and hoses in the old girl over the weekend, finally fixed the slow coolant leak. Found out that the formed return hose from the expansion tank is now considered to be a 'vintage' part by Jeep. Fortunately I was able to re-use it with a new wormdrive clamp as the stock one wasn't cutting it.

I also somehow killed my AGM that I bought a couple years ago, wouldn't charge past 8.9V must be a slow drain somewhere...but got a deal on a regular battery for $79 all in. Started up like a dream, it was like I just drove it the day before. Impressive lil shitbox. Leaving it disconnected since I'm not planning to drive it often.

Rust is getting pretty cancerous (nowhere critical....yet), will have to get a better welder and learn how to do sheet stock.

ALSO, we are moving overseas this winter and I will have to put the libby on hold. Might try to at least get out to do a couple trails and throw in the line here and there at some point.

Club Member
A smart charger might be able to recover the AGM, might not come back 100% but it's worth a try. I can try if you want to bring it to me.
F

Club Member
Thanks for the offer Richard, they tried at partsource and the readout was "She's dead, Jim".

I have to get one of those chargers...

Club Member
Congrats on the move - where will the adventure take you?
F

Kunker said:
Congrats on the move - where will the adventure take you?
Click to expand...

hey man, thanks, moving to Beijing for 3.5 yrs.

That's pretty awesome. Haven't made it to China yet, maybe one day.
F

Club Member
On Saturday we took the old girl up to this hydro line I'm sure you all know. She has a few more clunks and rattles now, but we had a great time. The first water crossing (not the one below, the one closer to Ca. road) was deeper than I remember, maybe I've only been on dry years. There was a pile of folks out from EOTB maybe, one guy in a red jeep blew his rad and was being towed out, bummer. Other than that just a couple guys on quads.

New sound to figure out is the rear diff is making some clanks when starting from a full stop but only while turning. Does NOT do it going straight. Seemed to only do it after highway driving, wasn't making any noise in the dirt. Before I open up the rear diff to inspect and swear like a trucker, any ideas???

Function > Form said:
New sound to figure out is the rear diff is making some clanks when starting from a full stop but only while turning. Does NOT do it going straight. Seemed to only do it after highway driving, wasn't making any noise in the dirt. Before I open up the rear diff to inspect and swear like a trucker, any ideas???
Click to expand...

Function > Form said:
Anyone? Anyone? Bueller?
Click to expand...

If it's only while turning and with hot oil, my guesses would be:

side load on the bearings? Not so sure on that one
spider gears not so happy? seems more likely