Club Member
Hmmm.....is the XJ ever really "ready" there is always several more projects lol. Have the Mustang brakes on though.

Club Member
I have done several things since I last posted about the truck but I keep forgetting the pictures, anyway the latest thing I did
(ie:I am going for a run the next day and I find something direly wrong with my truck that must be addressed by then - those of you who wheel with me know what I mean haha) was my track bar mount as it has always been an issue even before I put all the extra load of the new suspension on it. XJ mounts typically are always loosening themselves off or breaking and patching it had pretty well run out as an option as you can see by the pictures.

You can see how the layers of unibody and factory bracing were completely pulling apart and this picture was after I sledgehammered them back together. 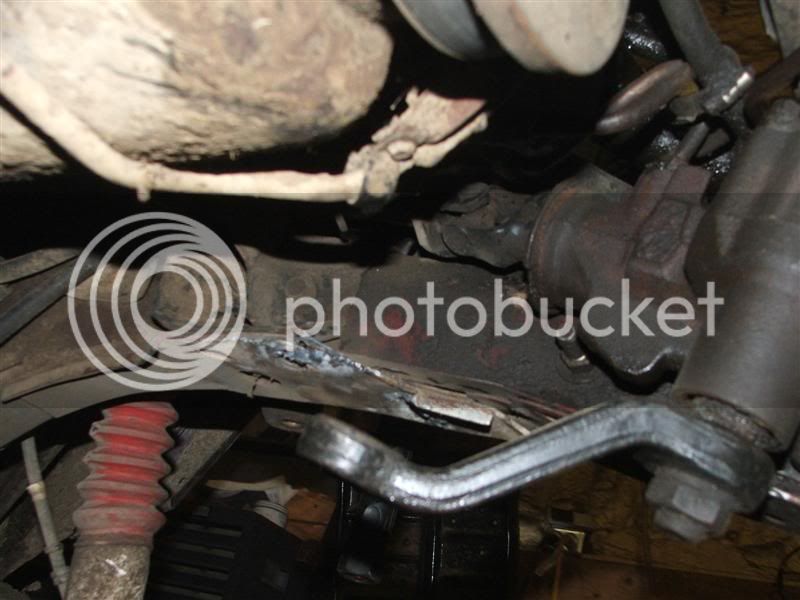 So after having the opportunity of recently using a good welder and knowing the difference it made even on my work I was forced to go buy my own http://www.millerwelds.com/products/mig/millermatic_180_autoset/ which I got for $930 CDN.


So after cutting everything off I plated the unibody frame with 1/4" and because the only metal really left there was on some braces inside the frame I rosetted to them as it was the most strength.

I found 2 tabs that I had left over from making the front suspension and welded them with a brace. 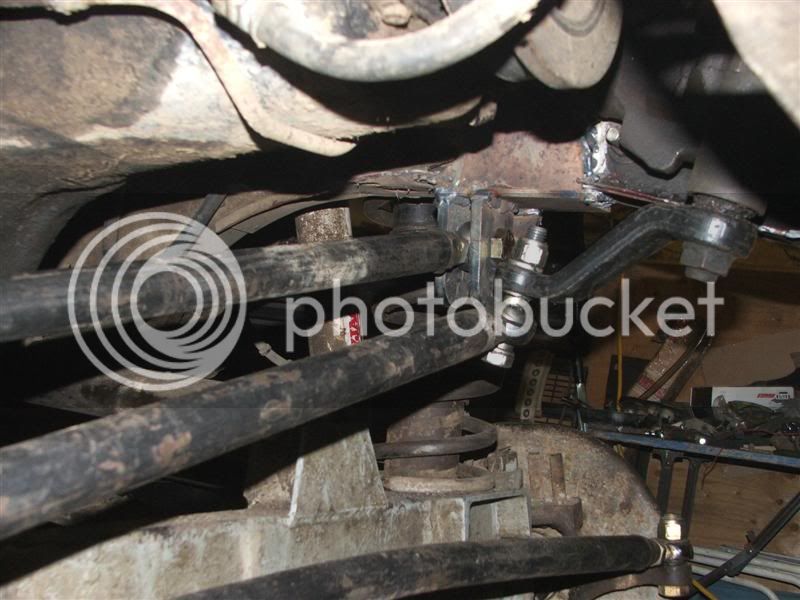 I should get commission from Valley oxygen for that welder sale.....

Looks like you front bumper is a permanent fixture now, no more unbolting it.
Looks much stronger than before. The only thing that worries me is that all the welds are in line with each other around the "frame". Watch for cracks along the weld on the frame.

would allow for more weld and distribute the load better at the joint.

Dirk said:
Looks like you front bumper is a permanent fixture now, no more unbolting it.
Looks much stronger than before. The only thing that worries me is that all the welds are in line with each other around the "frame". Watch for cracks along the weld on the frame.

would allow for more weld and distribute the load better at the joint.
Click to expand...

I suppose that would be a good idea if there was metal on any of those angles to weld to (see picture above) that is why I rosetted to the only metal available.

And I wouldn't comment on the welder commision too much.

Club Member
Wow looking back over my build thread I would have to say that OMG I do a lot of work and don't post any of it lol.
Well here is some new stuff, my XJ rear D44 is a 5x4.5 that I have been running with adapters to 6x5.5 and it made the rear end wider and I don't like the rear wider than the front. So I bought a Waggy Quadretec off-centre D44 rear and proceeded to strip the parts out to get read for the swap. 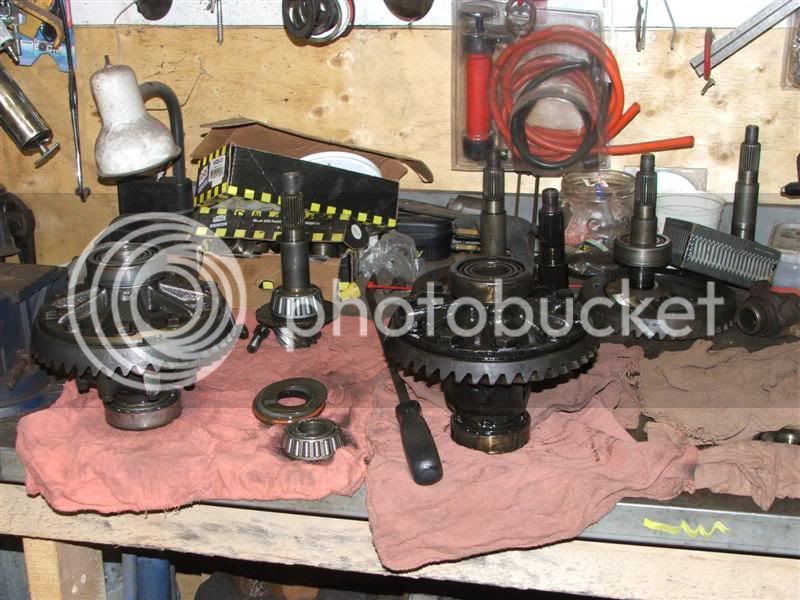 Boy was I ever glad I had a 3/4" Impact for this pinion bolt, it was the worst one I have ever encountered.

Cool shiny tool!!! I figured if I was going to keep doing diffentials I had might as well pony up and get a tool to do the job right and not wreck bearings so really it will pay for itself.

WTH is that? Man I had so many of these until I finally figured out what was going on.
Mainly that there was a slinger in there (yes usually only in the front) when I bought it and when Dirk and I set the gears up last year it needed hardly any adjustment so we had left it in there.

I probably took this apart close to 20 times and at one point left it for 2 seperate days saying "it is right, I am done" but then went back and adjusted it each day.
For those of you that know gear setup I know the toe looks all messed up but it is not a messed up pattern that shows up in any guides, what doesn't show real great is that I finally got a "bullet" showing up in the middle and when I talked to the guys at the shop in town they told me that used gears are almost impossible to get a perfect pattern on as the wear makes patterns wacky and they won't even setup used gears anymore.
In the end I think I could have almost tried another thousandth of shim but I think it will be fine.

Good thing I only have the front left to setup.

2 Days? WOw that is time consuming.

Club Member
Cage is going to be after Rausch Creek.

Club Member
Well another project I did before that I don't think I documented was putting Mustang calipers on my rear to see how they will work as cutting brakes. I never did find out as I never got the brake cables hooked up.
So now I had to make new brackets to fit the Waggy rear. I did some research and chose 1980 Toy "crappy" non-vented stock rotors as the Mustang uses a solid rotor and it was the only thing I could think of with 6-bolt. Well that the thickeness was withing .05 so I ordered some in, but I ran into a problem as Toyota bolts to their hub with the rotor and puts studs into the rotor so the inside of the rotor was not big enough in diameter to go over the Waggy wheel flanges.
So how do you get get 1/4" off a wheel flange without bringing it to a shop?...... Start your truck up and grind away, that is truly a poor man's lathe but it gave a nice even diameter when I was done.

Next I made a template for the new bracket which was quite time consuming as I had to account for how the backside of the axle tube expands right at the flange.

Here are the final results.

Club Member
For those of you that are aware of my D44 front Lockrite issues with it slipping I have found the problem that may help others in the future. When I took it apart to try the locker in another carrier I noticed how easy it came out by that I mean falls out on it's own which if I remember from last year it was loose but not like that. Anyway after I had to really pound the one at of my other carrier and pound it back in both in and out requiring the carrier to be clamped in the vise and all the tolerances were good on it I thought maybe I would check the tight pin in the "bad" carrier. Well the tight pin just "fell" into it as well, I usually do all my measurements for tolerance with the dowel in place which holds the pin in place more than I can move by hand but that is nowhwere near the load it would have while driving. So I just tapped the dowel in far enough to keep the pin from falling out and proceeded to check tolerances which caused me to notice that the pin could move up and down in the carrier hole by several thousands of an inch, so the carrier is done.

Club Member
Ok I think I have finally have my wiring just the way I want it!

Na, don't bother with the black tape, use duct tape or masking tape

Club Member
Ok I was tired of dealing with my Renix crap and not being able to check anything, it was a good system for the year it came out but nobody can diagnose it anymore. What did suck is that I have to change the entire wiring harness from front to back.

Here is most of the Renix from the dash to the front of the truck.

Things to know in hindsight, don't buy a donor truck with ABS and/or alarm. :banghead:

And the pile on the left is what I am putting into the truck or maybe it is the right pile I can't tell anymore.

Club Member
Underhood was 90% back together when I went to bed last night, it is just a problem when you take them apart over 2 weeks apart and they are so different

Yikes Dwayne, looking at all that hurts my eyes!

Club Member
Yeah it is hurting my head, this is the most tedious, time consuming for what it is job that i have ever done. Connie asked me if it was worse than cleaning horizontal blinds slat by slat and I said I would do that in a heartbeat over this.
BTW how you doing Marek?

lol, everything is going well. I'm just getting settled into a routine, my arms are already nicely tanned - now i just have to get the rest of me done! I'm already missing wheelin - you'll have to take lots of pics at spring fever. Have you started on the uni-link yet?